Marketing and promoting your music is a task every musician has to face throughout their career. But it’s also the one thing many musicians wish they never had to do again. With all the noise out there it can really feel like no one’s even listening to you.

So how do you stand out and get heard? How do you break through the noise and get your music the attention it deserves?

Today I’m going to key you in on a secret – the power of Content Marketing.

The BEST thing you can do is shift your approach – instead of PUSHING your music out in front of people, you need to PULL fans in with enticing and interesting content. Make them want to hear from you.

Now I know “content marketing for musicians” sounds a little intimidating… But as you’ll see, you can easily turn the content you’re already creating every day into plenty of interesting and engaging social media posts, but for now let’s talk about what content marketing for musicians actually is, why it’s such an important tool to have in your music promotion arsenal, and how you can use this approach to authentically promote your music and grow a powerful fanbase.

Get more engaged fans with these content marketing strategies:

You use valuable and interesting content to draw your audience in. It’s a form of “pull marketing” where you get your fans interested and emotionally invested in what you do. Think about it like you’re pulling fans in rather than pushing your music in their face.

So that means instead of posting “check out my new song,” you release a short video telling your fans about what the lyrics mean and include a link to purchase or pre-order.

Instead of relentlessly posting announcements about your new album (you know, the “buy my new album” spam), create a blog series or a vlog series on YouTube documenting the album creation process with easy links to pre-order.

You see the difference?

The Problem With Push Marketing

In the past, marketing was all about pushing out messages with big money to get it in front of as many people as possible and hoping some would bite. Artists with big record label backing could thrive because they had the big bucks to promote.

But in today’s social media-dominated world, this shout-louder-than-everyone-else tactic just doesn’t work (even the big labels are having trouble despite their big budgets). You just can’t shout loud enough to be heard over the crowd anymore. Especially as an indie with a minimal marketing budget.

Now, don’t get me wrong – announcements and push marketing style promotions will always have a place in your marketing mix.

But the problem arises when you literally base your entire strategy on shouting at your fans.

Instead, turn it into a conversation, draw them in, and they will be much more interested.

I also want you to understand that you don’t need to reach everyone when you’re promoting your music.

I know, I know… This is hard to remember in a social media world where big follower counts are glamorized. But try to keep it in perspective – the number of followers you have on Facebook or Twitter is just that – a number. And having people on your email list or following you on social media who don’t really like your music that much won’t do anything to further your career.

Instead, focus on finding the fans who will actually buy your music, come out to shows, and support you.

1,000 true fans is infinitely better than 50,000 followers who don’t really care. In short, it’s not about reaching more people. It’s about reaching the right people and nurturing those relationships.

This is going to influence the kind of content you release in your content marketing strategy. Always keep your ideal fan in mind when you’re creating new social posts, blog posts, videos, or events. What will they want to see? (Hint: if you’re not sure, ask them!)

Would you be more likely to purchase an album from an artist you follow if you just saw one or two announcements about it’s release?

OR if you had been following a weekly vlog series documenting the album creation process for a month?

Most people would go for the latter.

You see? Present it like entertainment. Who wouldn’t be interested to see what goes on in the studio? And after spending all that time watching that series, the fan is invested in your project – both from a time perspective as well as emotionally.

The key to effective content marketing is to start before you’re ready. Don’t wait until you have something to promote (like a new album, tour, gig, or song) to start building an audience. Fans don’t form around nothing.

Start NOW. Begin creating a fanbase around what you’re already doing everyday (even if you don’t have anything to sell yet).

Remember, the process can be just as valuable to you from a promotion standpoint as the finished product. Then, by the time you’re ready to release something, you have a captivated audience just waiting to see what you have in store for them next.

Tie in Relevant Calls to Action

Now I know it can seem counter-intuitive to use content to promote. BUT, the key to successful content marketing is adding relevant calls to action. Try to make the content you release have a purpose.

In marketing-speak, a call to action is just asking your fans to take some further action. Maybe you want your fans to vote on a merch design, pre-order your album, pre-order a ticket to a show, support you on Pledge Music, or sign up for your email list.

Let’s run down some ideas:

Hopefully this article has given you some ideas to promote your music. Keep in mind that content marketing doesn’t have to be overwhelming. Don’t think of content marketing for musicians as a completely new approach. It’s just OPTIMIZING and sharing content you’re already making.

Now that you have the basics, it’s time to move on and master the email list! Your list will play a HUGE part in your content marketing strategy for promoting your music (and don’t worry, this is going to be painless). 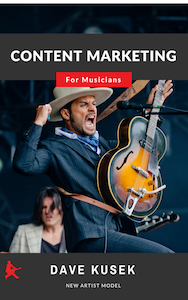